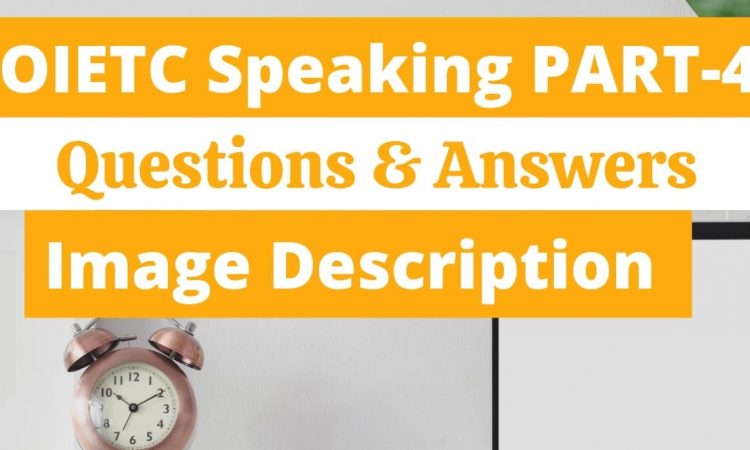 One or two picture will be shown

Candidate can see the picture for 15 seconds

Examiner will ask questions based on the pictures

Conversation will be held for 3 to 5 minutes

What is OIETC Speaking part-4?

Well, OIETC speaking part-4 is based on Pictures. For example, once you are done with part-3, your examiner will bring a picture on the display and you will be given 15 seconds to think about it. After that, you will be asked some questions about that picture. So, now let’s have a look at some pictures and questions along with answers. 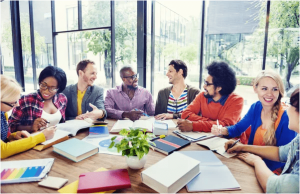 Let’s have some questions and answers above picture :

Question: How many people are there in this picture?

Answer: There are around 6 to 8 people in this picture.

Question: What is happening in that image?

Answer: Everyone is sitting a big round table. May be they are in a meeting or discussing something.

Question: Can you tell what are they feeling during their activity?

Answer: I believe they are enjoying as they all are smiling in the picture.

Question: Can you guess the time when the picture was taken?

Question: Describe the room that you saw on that picture?

Answer: The picture was taken during the day time as I can see sunlight coming to the room through the glasses. Also, may be it’s summer because everyone is wearing casual summer clothes.

Question: Describe the room that you saw on that picture.

Answer: The room is made of glasses and there are lot of trees outside. Besides this, there are lots of books and a little plant in the meeting table. Each and everyone is talking to each other. 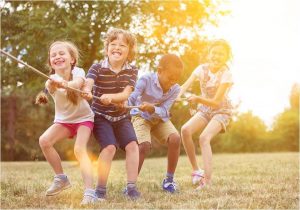 Question: What can you see in the picture?

Answer: I can see that some children are playing in an open field.

Question: How many children are there?

Answer: As far as I am concerned, there are 4 children wearing some casual dresses and laughing. To be more exact,  Two boys and two girls are there.

Question: What game are they playing?

Answer: I think they are playing tug of war which is one of the most popular games in our country and it needs more energy and courage to play this game.

Question: Describe the background of this picture.

Answer: The children were playing outside and there were lot of trees behind them.

Question: What are they wearing?

Answer: All of them were wearing comfortable casual clothes like t shirts, shorts and frock.

Question: Could you explain their feelings by their facial expression?

Answer: Well, definitely everyone was enjoying while playing this game and they were laughing.

Question: Are you familiar with this game? If yes, please elaborate the rules of this game?

Answer: Yes, I am familiar with this game and I have played it a lot of times with my friends when I was young. It is a contest in which two teams pull at opposite ends of a rope until one drags the other over a central line.